If you’ve saved your payment information with ActBlue Express, your donation will go through immediately.

Brought to America by his mother, Robert immigrated to the United States when he was a young child. He says becoming a citizen is his proudest moment, and it’s the reason he went into public service.

Robert is most widely known for his tenure as Long Beach mayor and his leadership of the city during the worst of the pandemic. 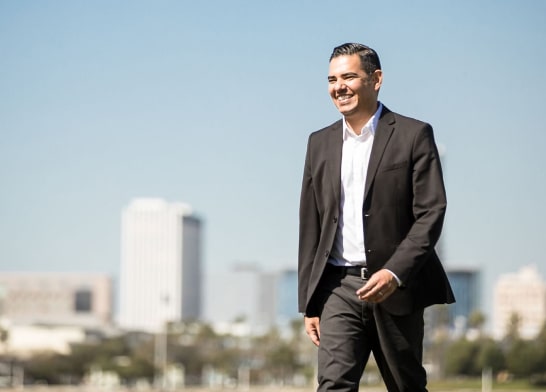 After losing both his mom, a health care worker, and stepfather to COVID-19, Robert vowed to work as hard as he could to ensure other families wouldn’t experience the same pain. He threw himself into expanding Long Beach’s mobile testing and vaccination efforts —  programs that went on to receive national recognition from health experts and praise from the White House and Governor Newsom.  Long Beach was the first city in California to vaccinate educators – allowing Long Beach Unified to reopen schools before most other districts — and the first city to vaccinate 99% of its senior population. The New York Times profiled the city’s vaccination efforts, calling it “a national model.”

As Mayor, Robert oversaw a period of unprecedented economic growth and expansion of opportunity for city residents. Robert worked to launch programs like tuition-free community college, a universal basic income pilot and a pandemic recovery package to ensure every Long Beach resident could share in the city’s success. Under his leadership, the city passed an aggressive climate action plan to end the city’s reliance on fossil fuels while protecting and expanding good-paying jobs. He was the first Mayor of Long Beach to have appointed a majority of women to city commissions and boards.

As Donald Trump entered the White House, Robert moved aggressively to ensure Long Beach protected its immigrant, Muslim and LGBTQ residents. He believes cities like Long Beach —  where neighbors from every conceivable background live side by side and look out for each other — represent the best of America.

Robert grew up in Southern California, and he is married to Matthew Mendez Garcia, a professor of political science at California State University, Long Beach.   Upon his election, Robert became the first immigrant and LGBTQ mayor in the city’s history, and he would be the first LGBTQ immigrant to serve in Congress.

Sign-up for updates on our campaign and for ways to get more involved.